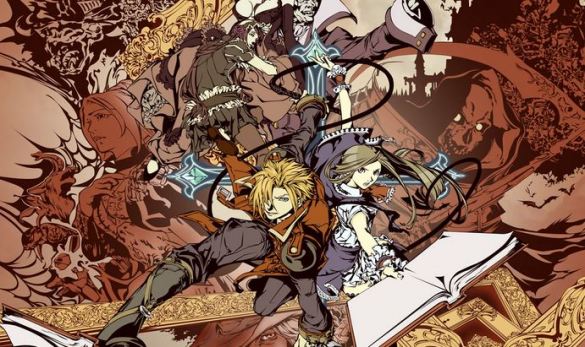 It is World War II. With each day, hundreds, if not thousands, of men, women, and children are dying. The anguish of these souls have once again summoned the demonic Dracula’s castle, and an artistic vampire has decided to take advantage of this in a bid for power. Enter Jonathan and Charlotte, the Belmont and Belnades placeholders for this game, who arrive at the castle intent on fighting evil. Evil art. Evil artists. Whatever. It’s 2016 and it’s time for the newest Castlevania. They wanted to experiment with the castle exploration by having ‘stages’ hiding in portraits throughout the game, and by having the partner system, a la Castlevania III, become a main feature. So, how is it ? Good. Very very good.

Well, let’s see. Portrait runs a pretty strange gamut, here, one that I’ve only previously seen in some Capcom fighting collections: The sprites in this game range from brand-new to made-in-1993. Of course, being the sort of person who never got to play Dracula X, and forgot most of the bland and gutted SNES port, this didn’t bother me. However, it has bothered some, so if you think you’d be the sort who’d be angry at an old sprite, well, you won’t be happy. That aside, this is still a wonderful looking game. I dare say it’s Symphony of the Night caliber. Every character is VERY well animated, and the two leads even have a little hidden animation in their sprites as well.

Pretty nifty if you ask me. The castle itself is rather mundane by now, seeing as there’s only so many ways to make a clock tower level and an underground caverns area, but luckily the portraits aspect of the game is here to fix that. The portrait areas are all rather nice looking, from the quaint European village theme of City of Haze, to the purely chaotic carnival atmosphere of Nation of Fools , or the rolling dunes of Sandy grave, the levels don’t really run the risk of being forgotten. Well, until the second half of the game, anyway. Also of note, the game once again uses the nifty trick of placing 3D buildings in the background that turn slightly as you move across the field, which is nifty, if a bit old hat.

Okay, here we go. Now, I’ll be the first to admit that despite my nearly two decades of gaming, I still suck at avoiding attacks in numerous genres of games. However, recent Castlevania titles have still managed to be pretty easy, if only through the ability to either power level so that massive attacks won’t hurt, a large collection of healing items, or elemental absorbing equipment. PoR, however, manages to have difficult boss fights, and even difficult areas where even normal monsters can still wreak havoc, despite healing items and level gaining. That was rather refreshing, I think. Obviously anyone can still beat the game with a little effort, so that’ll lead folks to say that it’s easy. Bah. So you made Castlevania 1 your bitch back in the day. Most likely you had to play the game so much that it wasn’t even fun anymore in order to do it. But, enough about that. The game is harder than previous free-roaming ‘vanias. That’s all I’m trying to say.